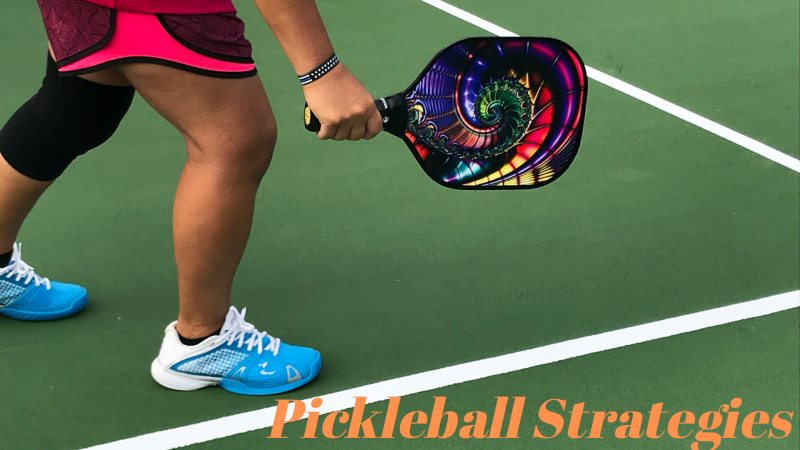 There are several reasons for it, the most prominent one being that it is easy to play and is suitable for all ages. It appears like a mix of badminton, tennis, and table tennis.

Two or four players play it with paddles similar to racquets, made of wood and other composer material.

The ball is similar to a Wiffle ball and is made of polymer and has perforations. There is a low-level net, like in tennis.

Pickleball is played on a 20x 44 feet court which is the same size as a badminton court.

There is a No-Volley zone that extends to 7 feet from the center-line of the court from over which the Net is placed. The Net is at a height of 36 inches on the side and 34 inches at the center.

The game starts with an underhand serve from behind the baseline and sent diagonally to the other side service court.

Only the servers gain points. The first side to score 11 points and having at least two points more wins.

In case both teams are tied at 10, then the game continues till one team is ahead of 2 points.

Pickleball courts are smaller than tennis courts. The ball moves slower than in tennis. So a player doesn’t need to run or move around much.

However, one must be quick on the toes and have good reflexes to win. Reacting and moving fast to return the ball quickly is essential.

There are several strategies and techniques for singles and doubles game. Here are some general advice on playing pickleball well.

The Singles game in pickleball depends entirely on you and your skills. So your strategies should be based on what you can do rather than on strategies that you are not able to execute due to your skill level.

While serving, be ready to move forwards and placing yourself in the center of your court so that you are ready to receive the return ball. It helps if you do not stray far from the centerline.  A strong deep serve will help you gain points as well as prevent you from losing the service.

Hitting the ball properly is the single most important strategy. Your hits should be well targeted to reach the opposite court without any faults. The hits while playing should vary in strength and direction. With a bit of added spin, you can make your opponent on his toes and running around to return your shots.

In Singles game your opponent will tend to place himself in the center so that he can cover the entire court. Use this knowledge to make him run around. Place you returns to the corners and alternate the next with placing the ball near the nets. This will keep him moving and likely to miss his shots.

Normally you should keep yourself near the center. Sometimes you have to move forward or backward, to return the volley. Being in the center is helpful as it helps you move backwards to return a shot or easily get near the nets. Be back in position immediately after returning the shot.

Keep observing how your opponent is playing and identify his weak spots. His weaknesses will give you ample opportunities to vary your shots, angles, speed, and strength.

Being able to vary your shots with every return will keep the opponent perplexed and guessing. Variations in your shots can be done by alternating between forehand and backhand shots, varying the angle, distance, and force of your shots.

In Singles game, the ability to move quickly from one position to another matters very much. Stay on the balls of your feet so that you can shift your body quickly. Mirroring the opponents’ movements also helps you anticipate where he will volley the ball.

Having an effective and actionable serving strategy keeps you in good stead. Practice on not committing a service fault. Aim to serve at the center of the opponents’ court, to be on the safe side.

Mastering hitting strategies for doubles means accuracy and force in the hit to send the ball where you want it to land. Keep noticing the opponent’s weaknesses; which one of them has what weakness? Team up with your partner to exploit that. It can be anything like a weak backhand or forehand shot. Getting the ball at the right spot to make the return difficult for your opponent is the key in using this strategy.

Having a return strategy helps you avoid faults. Return strategies are employed once you have made the serve and the ball is being returned.

Return the ball on the centerline and center of the court. This will make both your opponent chase the ball and upset their co-ordination.

Always aim for the middle area and keep pushing your opponents towards their backline.

When you are returning, your partner should be ready and near the kitchen area. After returning the serve, the player should walk ahead to the no-volley zone instead of staying back.

There are several volleying strategies which are used to return a ball when the play is in progress.

In Middle Drop Shot the player hits the ball when it is low or in half-volley just to clear the net and land in the center of the court. This is a very popular shot.

In the Hard Hit strategy, the ball is hit hard, sending it to the baseline of the court at the back. This forces the opponent to move back quickly and most of the time they miss to return the ball.

Stacking implies rearranging your teams positioning in the court. This may be done to gain an advantage or cover a weakness. Partners can stack to let a player with a stronger forehand or backhand to attempt t such shots. If any player has a weak backhand then the other can stack so as to prevent the other player to hit his weak shots. Stacking is also effective in case of poaching.

Third shot strategies are important for scoring. This is achieved by accurate hard shot sending the ball to the back of the opponent’s court, or a softer shot that just clears the net to land in the non-volley zone. These third-shot strategies are divided into several types like Dink, Lob, Down the Line, Side Drop Shot, or Drilling the Net Person.

Coordination with your partner is vital. It prevents you from wasting your effort in running all over the court. You can cover the court well with less movement. There would not be any weak uncovered spot where your opponents can land the ball. A well-coordinated team will have an advantage over its opponents. Co-ordinating your movement with the partner will keep you maintaining your advantage.

Poaching implies moving on to your partner’s area to return a ball that comes into your partner’s area. Poaching should be attempted when you are in a better position to return the ball, than your partner. Poaching as a strategy is very effective and prevents faults due to the mistake or lapse of a partner. However, effective poaching needs a good understanding and coordination between partners. In certain cases where both the partners have similar strengths in forehand or backhand shots and both play with the same leading hand like being left or right-handed, poaching is a great way to turn a disadvantage into an advantage.

Dink implies a soft shot that is dropped so as to go over the net and drops into the non-volley zone. This is a tricky shot and plays havoc with the opponents. The return shot from the opponent may go into the nets or go out of bounds, resulting in a fault.

11. Positioning near the net

Correct positioning and moving on the right spot is better. Just stretching yourself or your arms and paddle will not make for an effective shot. Being near the net helps you make deep shots that keep the opponents on their backcourts. Hitting the ball deep into the opponent’s court gives you time to come close to the ‘kitchen’ which is the non-volley zone. You can get this advantage while serving or returning.

Whether it is a singles game or a double; the same strategy of observing your opponents matters most in both. Noting their weaknesses and their style of stroke for clues to dominate them, pays rich dividends in terms of winning the game. Observing your opponent closely also helps you anticipate their shots. This enables you to get into the right position to return the ball.

13. Keep returning the ball and continue the rally

Often you need not use any strategy but just keep the game going. Sooner or later the opponents will be caught making a fault.

Pickleball is a constantly evolving game, and new techniques and strategies are being developed as the game spreads far and wide. Pickleball is played by people of all ages and different physical conditions. Some strategies are meant for certain kind of players whereas others are fit for another set of players. One can choose whichever works best for him or her. The ultimate idea, as the name pickleball suggests, is to have fun and enjoy the game. and