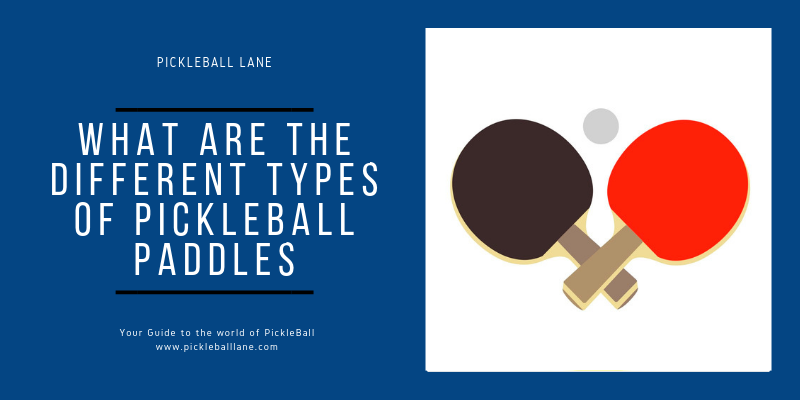 There are many types of Pickleball paddles. Depending on your level of expertise you can decide the most appropriate one for you.

For first-time pickleball players or beginners who are okay playing with a heavy paddle and want to spend less on the first paddle, wood is a good viable option.

An important thing to note is that wood was used to make the first pickleball paddles. These were indeed usable. Today, the new wood pickleball paddle versions are just improvisations of the original one by adding grips and also safety straps which save the paddle from slipping off out of your hand.

Purchasing of pickleball wood paddles in large quantities for YMCA, schools, summer camps, community center, etc. is a good and decent option. In these types of sports where paddles are used a lot, wood can serve the purpose very well since it can take a good amount of beating and still survive.  Wood has low cost and is durable and hence is a good option.

Also, the wooden paddle will be good for kids who play 45 mins of pickleball in P.E. compared to senior players who play the game frequently.  Kids will not be very sensitive to the paddle’s weight as the duration of use is lesser than frequent players.

Also when visitors or family pay you a visit, wood paddles can come in handy. This way you can have some extra paddles stocked easily for friends or rookies who would want to play the game.

For all others, we suggest you go for the mid-range graphite or composite pickleball paddle and avoid the wooden ones. You will be able to find affordable paddles as the prices have dropped comparatively.

The paddles of this kind are made using a carbon fiber or fiberglass hitting surface and have a composite core. Nomex™ (rigid nylon), aluminum or polymer is used to make the paddle’s core. Each type of paddle core has its own advantages and disadvantages, which we will explain below.

Pickleball paddles made using composite are more popular as the player is able to spin the ball easily due to the textured surface.

These majorly weigh between six to nine ounces. These paddles also have a core similar to that of composite paddles where polymer, aluminum, or Nomex are used.  It has a graphite face on both the sides, that makes it different from other pickleball paddles.

The graphite layer is thin, around a few centimeters usually, which is close to a fingernail’s thickness. The layer of graphite is thin, usually only a few mm (about the thickness of a fingernail). These paddles are one of the best selling paddles. They are strong and light.

The core construction of the graphite pickleball paddle

The main difference between the 3 common composite cores types:

These paddles have lightweight aluminum cores. The honeycomb structure made of the aluminum inside makes it a strong paddle while its light weight gives great control and action.  Aluminum core for the player who always wants to be in control could be one of the best options, especially if he is okay to sacrifice a little of the power and drive in return for more maneuverability and finesse.

Nomex™ helps create pickleball paddles that are durable. These have many applications.  The making process starts with cardboard resembling material which is dipped in strong resin to produce a durable material to construct paddles using the honeycomb pattern arrangement.

The material first used to make composite paddles was Nomex and still is a leader in the world of pickleball. Many players who are serious about pickleball still prefer the Nomex paddle.

They are the loudest and hardest paddles. They make the famous “popping” sound which ones will hear on a pickleball court. This paddle is the best buy when looking for power and speed and power on the delivered shots.

A singles play demands fast playing style and extra power, both of which are provided by a Nomex core paddle.

Polymer paddles are made using a blend of plastic. It is the latest core technology in the pickleball world and also very popular compared to other paddles available in the market. These paddles are said to be the quietest ones in the paddle market. This feature can become one of the most important deciding factors while buying the paddle especially if you live in a gated community, have a shared space in a recreation center or gym, where the pickleball noise could be taken in a negative way.

These paddles are also softer apart among the 3 cores. Though you can add power behind every shot using polymer core paddle, this polymer core dampens the shots which make them the best buy for the controlled player.

The issue of pickleball creating noise is becoming a bigger issue with the opening of many more pickleball courts thus creating a conflict between the players and the non-players of the community. Few courts and communities have actually listed which paddle is approved by them in order to tackle this issue. And they ban players if they use certain kind of paddle models. You also need to keep in mind the Pickleball rules when you choose poly core paddles.

“Edgeless” means that the paddle does not have a protective.  When the paddle is dropped or bangs against tough surfaces, the paddle edge chips off. To protect the edge from chipping off, the guard is used.

Most serious players like using this because the surface area of the paddle is much more in an edgeless paddle when you compare it to other paddles. Though these type of paddles normally do have a very thin tape covering the paddle. This is in order to protect the paddle without any impact on the size of the face of the paddle. This is, however, not sufficient to give it enough protection from impacts.  Hence such paddles are more prone to nicks or chips on the edge of the paddle.

Today, most manufacturers of pickleball paddles create oversized paddles. They add length to the face and also shorten the handle length.  They make sure to keep the pickleball paddle total length within the regulations.