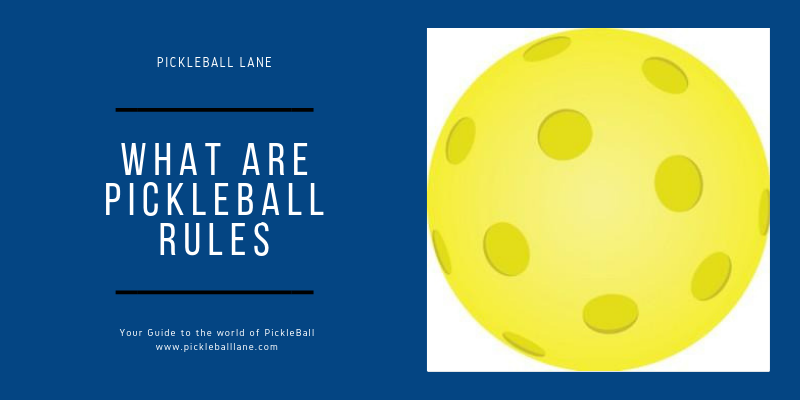 There are many rules when it comes to Pickleball playing. Let’s check the main ones.

Wearing the required type of tennis shoes is very important before you enter the tennis court, either outdoors or indoors. The tennis shoes should best usable during sideways movements. They should have soles that are non-marking and that are durable and flat too. Apart from this, please remember to carry water for drinking so that you remain hydrated.

The weight of the paddle should be light and not very heavy. Choose one that will give you the power and the needed touch/feel. Also, the grip needs to have a cushion and has to feel and be comfortable while using. The grip could be re-wrapped whenever needed or a thin could be added over the grip. Do make sure to have your name written on the paddle you own right away. You can choose the best Pickleball paddles on Amazon.

Playing doubles, mixed doubles or singles is up to your choice. People of all ages play this game. Playing with skilled players as good as you will make it fun and there will be good competition in the game.

The pickleball game is played till 11 points. But the winner has to win by two points. The duration of the game could be between ten to twenty-five minutes. Only while serving can the players actually score points? To begin with, the serve should be shot from under the hand and the paddle and the ball contact should be below the player’s waist level.

Every team should deliver the first shot only after the ball has bounced, and after this, both the teams can decide to move ahead till the line which is non-volley or they should remain at the main baseline. Moving up towards the line quickly would be the best. Just make sure that you are followed up by your partner.

While playing, partners must always move up or backward or by each other. You cannot volley beyond the 7-foot zone which is non-volley. This facilitates the “dink” shot or drop volley strategies. Here players can hit shots skillfully over the net that then land in the dreaded non-volley zone. This zone is called “the kitchen”. When the ball bounces in the non-volley zone or kitchen, only then the player can get into the kitchen in order to hit the ball over. Few tips: keep the paddle high and centered to the chest when waiting for the ball. This way you can handle a shot coming on any of your sides.

Make sure to warm up always before you step on the pickleball court. A quick 5-minute walk will raise the body temperature while a few stretches or maybe a slow walk can get the body temperature down to normal which helps to cool down. Remaining healthy is very important in order to play pickleball in the long run. Once the game finishes, all the players gather near the net to tap their pickleball paddles together. This is done as a gesture to show it was a “good game”. Pickleball players prefer tapping the paddles and laughing a bit instead of just shaking hands.

The pickleball game is either played singles or doubles ( 2 players in each team). Doubles is most commonly played.

The rules and the playing area size is the same for doubles and singles games.

Make sure that the serve is underhand.

Contact with the ball should be below the waist.

While serving one foot is placed towards the back of the baseline. None of the foot can contact the court or the baseline until the ball is not served.

One is given only one attempt to serve. However during a let (when the ball on being served touches the net and lands on the service court, you are allowed to replay).

In the doubles team, both players get a chance to serve and thus score points till a fault is committed by them (this is not allowed only when it is the first serve of a new game).

Only when the server scores a point, can he switch sides. And the next serve is initiated by the server from the odd/left court.

Till the team commits any fault, the second server can continue serving and let the opposite team serve.

At the onset of a new game, only one of the serving team partner’s has the chance to serve till he commits a fault. After the fault, the receiving team gets to serve.

Only the serving team can score.

These games are usually played till 11 points, where the winner has to win by two points.

In tournament games, the points may be till 15 or 21 and the winner has to win by two points.

One cannot volley within the dreaded non-volley zone. Because of this rule, players cannot play smashes standing within this zone.

If the player when volleying the ball, steps inside the non-volley area, then it is considered a fault. This also applies to in case of anything that the player wears or carries touches the main non-volley zone and any of its associated lines.

If the ball contacts any line during a serve apart from the kitchen line, is considered to be “in”.

Only when the served ball contacts or steps into the kitchen, it is considered short and is a fault.

When a play is stopped by any action that violates the rule, it is called a fault.

And when a serving team makes a fault, they lose the chance to serve.